Let A Published Novelist Paint Your FULL-LENGTH Portrait In Words


2012 was a quiet year for the painting-portraits-in-words enterprise.  McDonald was  in Paris on an artists' residency, and Lehmann moved down to Melbourne.  But the spruiker and her word-painter are back in Sydney.  They're ironing the banner, putting a new ribbon on the typewriter and drawing up a good supply of letterhead, in preparation for the next session...

For the past nine years, when not painting portraits, the Published Novelist has been doggedly scribbling away at her second novel.  On several occasions, she has announced the completion of her great work, only to retract the glad tidings shortly afterwards and disappear yet again into her study.  Finally, last year, it was official.  It was nameless, but finished.  But it was accompanied by no triumphant announcement, no celebration.  It seemed Lehmann didn't even care if anyone read it.  When McDonald returned home from Paris, she was dismayed by the despondent state in which she found her protegée.  This state of affairs called for action: in fact, A RAFFLE.

First Prize is a full-length portrait in words of the winner (or whomever the winner nominates as a subject).  All proceeds of the raffle go towards printing Part One of Lehmann's new novel.  In McDonald's words: "Lu was in the doldrums.  I said, 'You need some wind in your sails - your novel needs some wind in its sails.  We need to get it out there.'  I came up with the idea of the raffle.  At first Lu was a bit reluctant - she was afraid a full-length portrait meant she had to write a novel about the winner, or a nude full-body portrait.  But I said, 'Everyone knows a picture tells a thousand words - according to my calculations, a FULL-LENGTH picture would be about two-thousand words.'  Lu started warming to the idea.  She even did a little drawing and got it made into a rubber stamp and printed up a batch of tickets.  They're a bit hokey - but that's the Lehmann signature style, I guess."

McDonald and Lehmann kicked off the raffle-ticket campaign and said 'goodbye Dragon, hello Snake' with a session of the portrait-painting on Saturday February 9, taking up position in their rightful spot, the fig-tree avenue in Hyde Park. 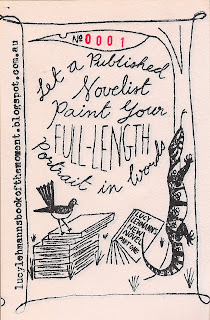 Posted by lucylehmann at 3:52 PM No comments: 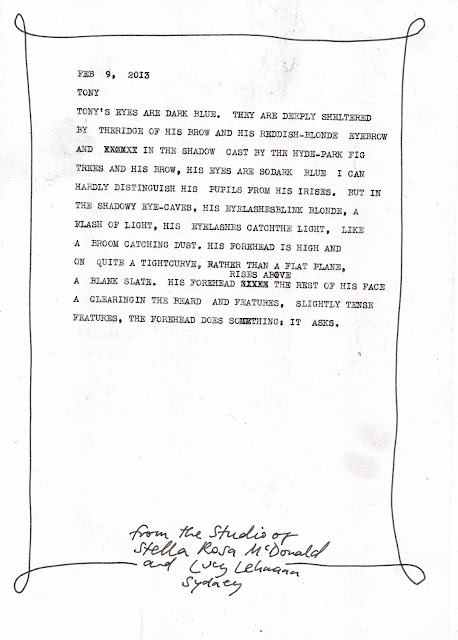 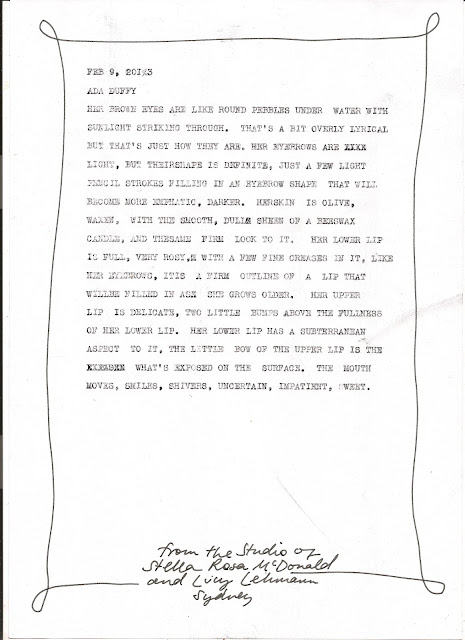 Quan and his three children 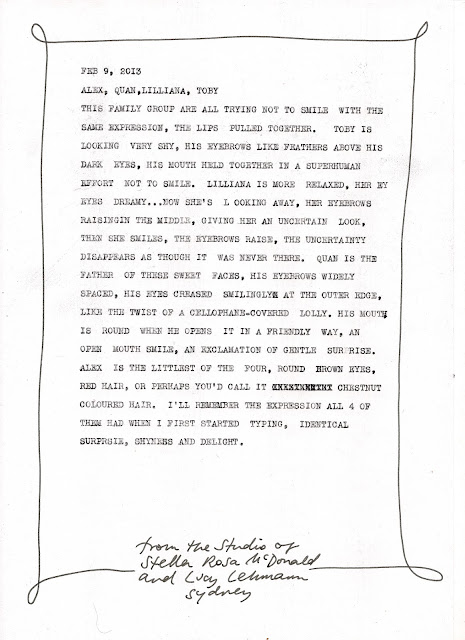 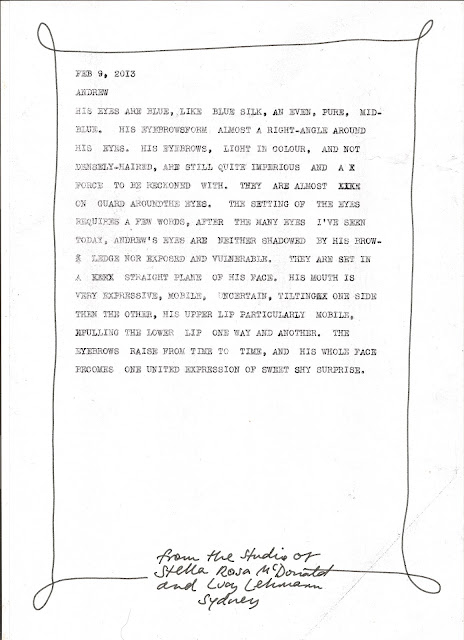 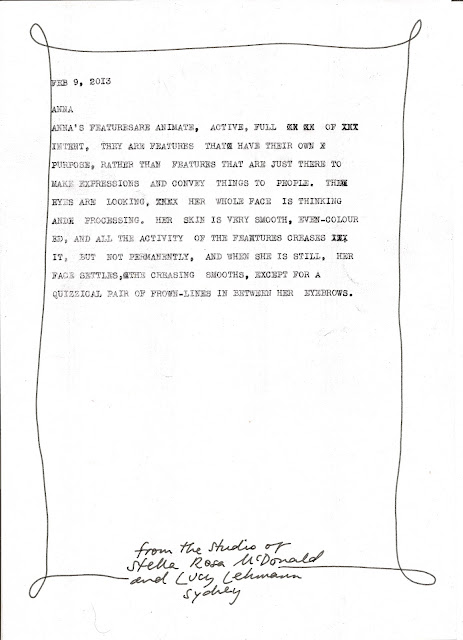 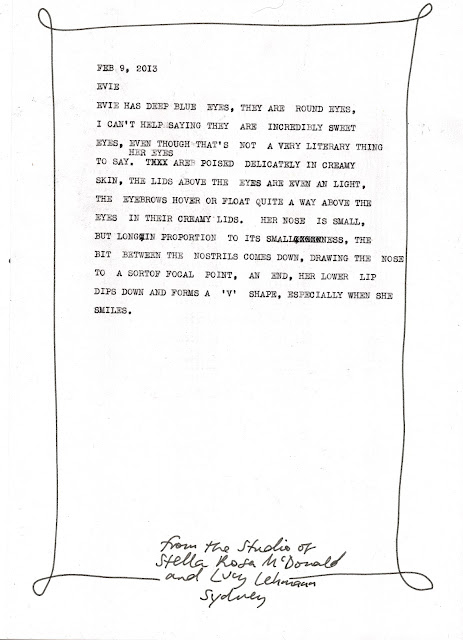 Posted by lucylehmann at 2:17 PM No comments: 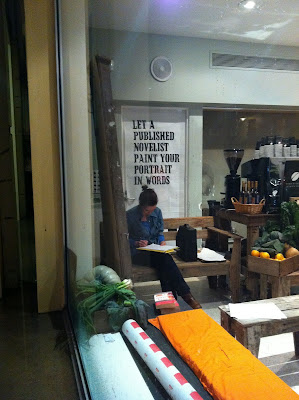 Tonight Lucy and I did our first paid gig for the opening of some pop up spaces in The Rocks. We set up our pitch next to the kitchen and after Lucy had prepared our instruments I began to work the room. It was strange working indoors without natural acoustics, without a sky to stare at between announcing the minutes, hooking the crowd and keeping Lucy in line. And it was strange to be paid a fee.

The lady who ran the kitchen gave us food and commiserated with us. She wants us to pitch at her cafe and gave us some useful advice on how to swindle customers.

My bottom is on the mend so I'll suggest Lu and I get on the road soon...Perhaps to Broken Hill or Quebec...
Posted by lucylehmann at 5:14 AM No comments:

An observant reader will noticed that nearly two years passed between our first 'paid' gig and the next portrait-painting session.  That reader might further discern the fact we did five sessions in a couple of weeks.  I think we overdid it.  Painting portraits in words is first and foremost a business venture, but it also has a kind of spiritual quality, where Stella has to channel all the spruikers who ever came before her, and I have to tap into the great reservoir of how to describe faces.  We can certainly flog our wares, but we can't flog them too often, or our fonts will dry up.

Our 'paid' gig also had some fatal flaws - people were all dressed up in their art-opening clothes, and art-opening manners, and art-opening make-up, and when they sat down in front of me, wreathed in their social smiles, I wanted to snap at them: "Can you just be real for five minutes!"  It wasn't a situation conducive to still and natural faces, and a pall of resentment slowly crept over me. 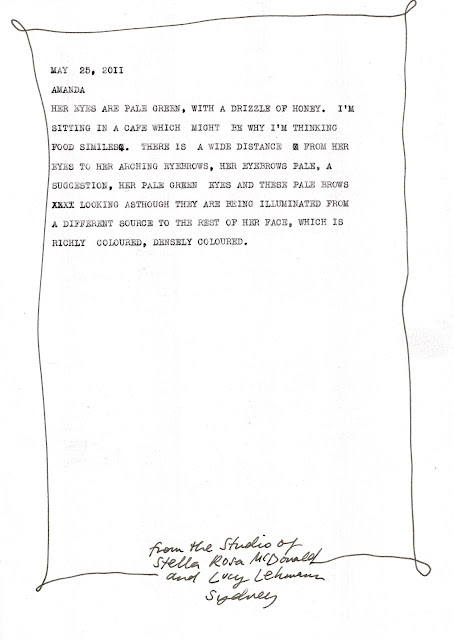 I've put Amanda's up here as it is the most uninspired and scraping-the-bottom-of-the-imagination portrait I've done.  No fault of Amanda's.  I was having portrait-painter's burn-out. 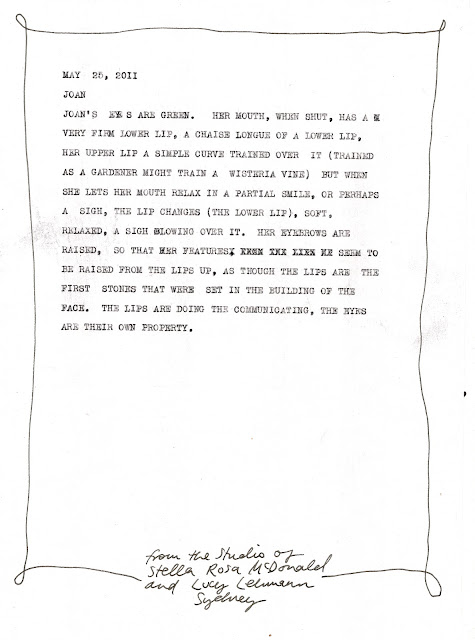 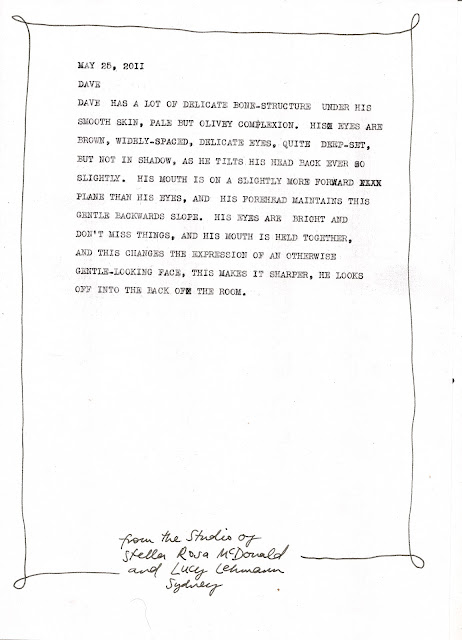 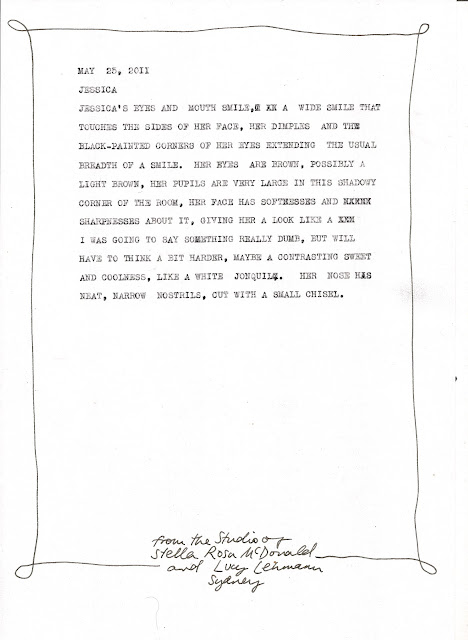 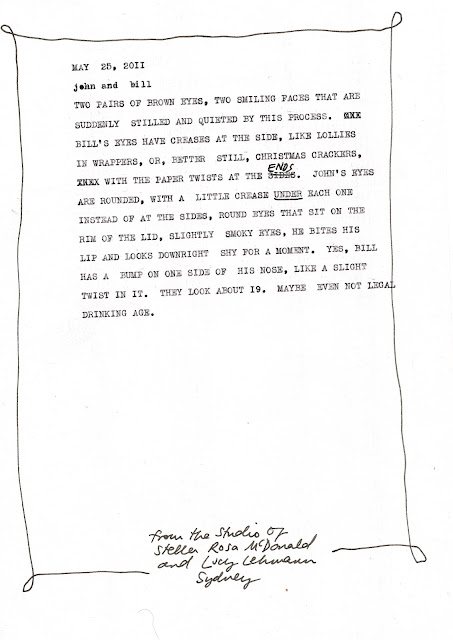 John and Bill
Posted by lucylehmann at 1:30 AM No comments:

The last day of the Sydney Writers' Festival

I got up early (10am) to draw up some more of our letterhead - we were expecting to do REAMS of portraits on this, our last chance to clean up at the Writers' Festival, where we get paid by the glorious minute (50 cents for me, 50 cents for the boss). Stella says when the Festival is over, we are going back to 'gold coin donation'. I don't ask why, and I dare not ring my union rep.
Posted by lucylehmann at 8:17 PM No comments:

Jon and Marg arrived as we were setting up, saying, "Great, you're here! We saw you yesterday, we've been looking out for you!" - music to any busker's ears, as long as it doesn't then follow with, "We've had some complaints", "We need to see your busking licences", or "So who have you been liaising with from the Official Festival Organisation Board?" etc. 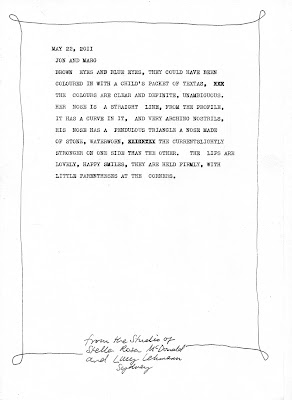 Posted by lucylehmann at 8:00 PM No comments: 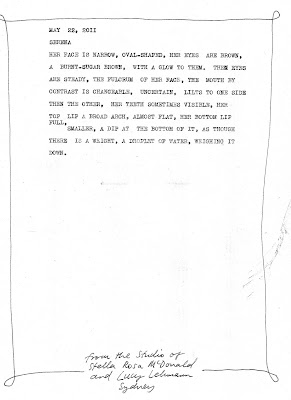 Posted by lucylehmann at 7:57 PM No comments:

LET A PUBLISHED NOVELIST PAINT YOUR PORTRAIT IN WORDS